About Us
About Us | My Co-op’s Energy Mix

Your electricity is produced using a mix of fuels and technologies: coal, natural gas, hydropower, wind and energy efficiency. This allows for flexibility while providing reliable, affordable and responsible electricity.

Our wholesale power supplier, Associated Electric Cooperative, typically uses the lowest-cost resources first to serve member load. Resources include hydropower, coal, wind or natural gas. AECI also looks for opportunities to purchase power from other utilities at a cost that is lower than it can generate.

AECI receives supplemental and peaking power from Southwestern Power Administration, the federal power marketing agency that supplies power from 17 reservoirs across Oklahoma, Arkansas and Missouri. While hydropower is one of our cheapest resources, it is a limited commodity dependent on rainfall and the capacity of lakes and dams to store the water.

Coal generation historically supplied the bulk of members’ electricity, and continues to play an important role; however, lower natural gas prices have led to increased natural gas generation the last few years. And while supplemental hydropower is the lowest cost source, coal and natural gas typically are less expensive fuels for electricity generation than intermittent wind or solar sources.

In addition, power plants can operate around the clock, respond when wind or solar energy is not available, and do not depend on the ability of storage like wind, water and solar power. As a result, fossil-fuel-based generation is currently the most reliable form of electricity for members.

Associated’s signing of long-term agreements, as well as its high-voltage transmission system, made these wind farms a reality.

AECI remains open to evaluating economical options for adding power supply to the system. To satisfy electricity demand, we must look at all cost-effective generation resources that are available. In addition, we continue to implement energy efficiency and equipment rebate programs that reduce energy consumption, as well as reduce the need for new electricity plants. 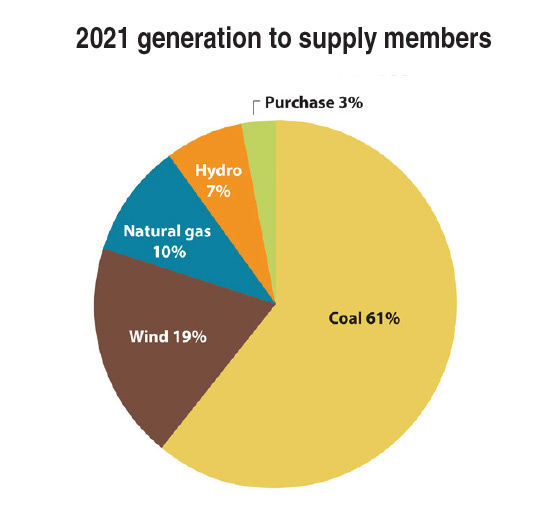 Due to an increase in Covid cases, we have decided to close our lobbies effective Wednesday, January 12th. This closing includes both our Stigler and Sallisaw offices. Our drive-thru windows will remain open during this time. Please feel free to contact us at 800-328-2368 if you have questions or need something that requires a visit to our office and we will be happy to make arrangements for you. Thank you for your understanding!